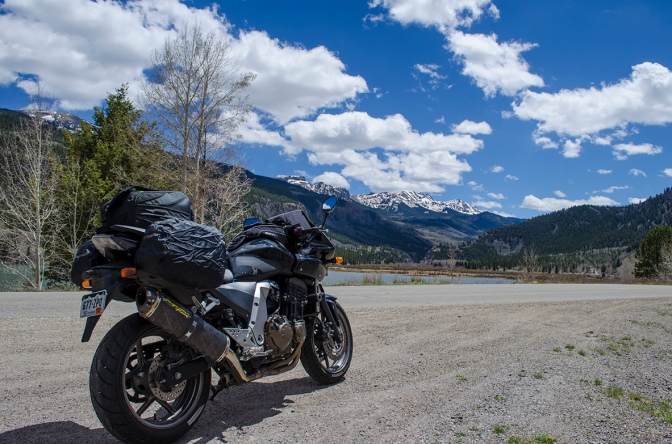 I love this byway because of where it begins on the northern edge. Unfortunately, the scenery on this end of the byway has changed dramatically since I was a teen in the early 1980s.

I rode my sport bike on this particular tour as part of my 49th birthday celebration. Since the weather had been getting better with the season change, I knew the mountains in Colorado were just beginning to warm up. Yes, I’m a wimp when it comes to riding in the cold, but that’s not the only reason to not ride in the cold. Cold motorcycle tires don’t grip the road as well as when they are hot.

So back to my impressions of this scenic and historic byway…It took me and my riding buddy, Jeff, (my hubby doesn’t have a moto at the moment, so a friend joined me for this leg of the tour) about three hours to get to the northern end of the Silver Thread byway from Denver, which begins at the junction of Colorado Hwy149 and Hwy50. It veers to the south at this point and passes by the eastern edge of Blue Mesa Lake. This is where I ended up quite disappointed in the scenery. You see, years ago, when I was about 17 years old, my family and I camped at Blue Mesa and enjoyed an abundantly filled lake along with a very high Gunnison River (this river feeds the lake from the east side).

As Jeff and I approached the eastern end of the reservoir, I noticed that the Gunnison River was quite low at this point. I wondered if the lake would look any different than it had when I drove around it in November when I toured the West Elk Loop. My hopes were dashed as we approached the bridge turn-off to hwy149. The Blue Mesa was still very low and what used to be water only a few feet from the edge of the road, was now a very long and sandy beach area all around the lake. I wondered if I was going to be disappointed any more along the rest of this byway. Luckily for me, I was on my motorcycle. So any day on two wheels is a good day.

I was not disappointed along this byway at any other point. We were in the mountains and the weather was beginning to warm up as we rode. Not only that, but this particular road is nice and curvy most of the way down to South Fork at the junction of Hwy149 and Hwy160. The road rises to just over 11,000 feet as it passes through dense forests and the Slumgullion Earth Flow at Slumgullion Pass. The only thing missing were budding Aspen along the way, but being late May meant that a lot of the vegetation was just beginning to come out of its long winter’s nap. Vegetation in the higher elevations takes a little longer to bud and green up for summer as compared to trees and shrubs at the lower elevations.

This did not bother me. Actually, since I live here in Colorado, I expected to see still slumbering Aspen along much of this byway. I also expected to see some history since this route passes through old mining towns. I was not disappointed. Actually, I was more than delighted to find out some more of Colorado’s history when we stopped for a bite to eat in Lake City.

Where did we eat? at the Packer Saloon, also known as Cannibal Grill. If you are conjuring up thoughts of the infamous Alfred Packer, you would be spot-on as far as the history of the area is concerned. Just a few miles south of Lake City (along hwy149) is the massacre site where five people who were allegedly eaten by Alfred Packer in the late 1800s and were finally laid to rest.

The food at the Packer Saloon was quite good. It hit the spot as far as lunch was concerned and kept me happy until our very late dinner.

After lunch, we mounted our motos and continued on up the road to Slumgullion Pass. At the Lake San Cristobal turnoff, I took a short excursion to the lake to get a few shots of the area. Because the weather was so very cooperative, I was not disappointed in how the scenery greeted me when I arrived at the lake. After a few photos, I was off again and enjoyed the curves along the road to the pass and to catch up with Jeff. He said he would wait at a place called Windy Point. When I arrived, I was glad that he had chosen this place to hang out. The scenery was breathtaking; a mountain panorama deserving of many photos of various sizes and a few quiet moments to breathe in its beauty…ahhh.

As we slowly strolled back to our motos, I took a few moments to take a few more photos and one last glance of the mountain range which would disappear in my rear view…but, only for a short while.

Riding the curvy road up to Slumgullion from Lake City can be quite exciting by sport bike, but on this particular ride, I kept my cool, mostly because the road still had gravel scattered around several corners. This is something else about Colorado and winters in Colorado in particular. We use a gravel mix on the roads in the winter so that vehicles can maintain some grip on the snow and ice. This gravel sticks around well through springtime and sometimes into early summer. This mostly happens because snow hasn’t quite stopped falling in the high country and because there aren’t very many travelers on the mountain roads to help move the gravel to the sides.

Our next stop was Creede, but I took a side road along the way so that I could see the North Clear Creek Falls and snap a few more photos. This sight was quite beautiful, noisy and yet very quiet. Being May, there still aren’t many visitors to this area, because people don’t really start coming to the mountains until June. I was fine with the alone-ness. It felt good to feel like I was on my own time for a little while. And, I knew Jeff would be in Creede when I got there.

Sure enough, there he was…sitting at the only gas station in Creede. I fueled up my bike – as a side note, I love my bike’s gas mileage which is usually 48 mpg, but on this particular trip, it was getting as much as 58 mpg; more on that in a different blog. After fueling up, we chatted for a bit while Jeff finished a cool drink and the station attendant came out to chat with us for a little while. She wondered where we were riding from and after telling her, she explained that the area typically has a population of about 500 most of the year, but in the summer, it grows to about 2000. This is because there are a lot of vacation home owners who reside in places like Oklahoma and Texas for much of the year and who spend their summers in the southern parts of Colorado.

Now this station attendant was quite friendly and as we chatted she also told us a story of one visitor who had remarked about the cliffs that surround the northern end of town. She told the attendant how much she “loved what they did with the cliffs.” The attendant asked the visitor what she meant and the visitor said that the colors they used on the cliffs were quite realistic. She then promptly told the visitor that the cliffs were spectacular because they are real. The attendant said she felt like she was being viewed as an actor in some sort of Hollywood prop-made western town. We all had a very good laugh and then Jeff and I got back on our bikes and continued south through South Fork and on to Durango and a very nice, quiet, family-sized vacation rental just outside of town.

Since this trip was part of my birthday celebration and I had planned to be on vacation for several days, we did not head back to Denver at the end of the Silver Thread Byway.

Here’s something to consider if you plan on traveling like I did on this tour…try staying at a vacation rental. What I like most about vacation rentals is that they have everything you would need to feel like you were at home. This little rental had one huge bedroom with small sofa in the room and a full bathroom. There was a sleeper sofa in the living room and just off the kitchen was a nice little balcony which overlooked a huge patio below. On the patio were a gas grill and a huge brick-oven type fireplace. The kitchen was fully stocked with all the flatware and cooking utensils necessary for making three square meals a day along with dishwasher, refrigerator and a gas stove. The nice thing about this was that I spent about $30 at the nearby grocery store and the food I bought lasted me several days. There was no need to eat out three times a day. In my mind, even if the vacation rental was a little more than $100 per night, I was saving on food expenses. Oh and I checked the nearby KOA which had camping cabins for as low as $49 per night, but no bedding, cooking utensils, stove, frig, etc.

Two websites I use to search for just the right kind of vacation rental:

The next day, Jeff and I rode the Unaweep/Tabeguache Scenic and Historic Byway.

I am a photo-journalist at heart and an educator by trade who enjoys sharing life through a virtual rose-colored lens. I started this blog mostly to share my travels across the 25 scenic and historic byways of Colorado. My plan is to complete these 25 journeys before May 24th, 2014 (my 50th birthday). All of the roads have some unique feature/scenery along the way. A couple of the roads are 4-wheel drive accessible only and a lot of the roads have so many twists and turns that I will not only drive these roads by car and 4-wheel drive, but also by motorcycle. There's a bit of a story behind my dream of driving the Colorado byways and it will be told throughout the many blogs I will write over the next two years. One other thing I will work over the next two years is creating a way to pay it forward. I don't consider myself rich in the monetary sense, but most definitely rich in gratitude, happiness and compassion. If there is more that I can do by sharing my travels and unique perspective of the world around me, then I want to do as much as I can to make it happen. Photo copyright: All of the photos in my blogs are my own unless otherwise noted. If you are a for-profit organization, then please ask permission to use any of my photos. View all posts by mtnairloversview